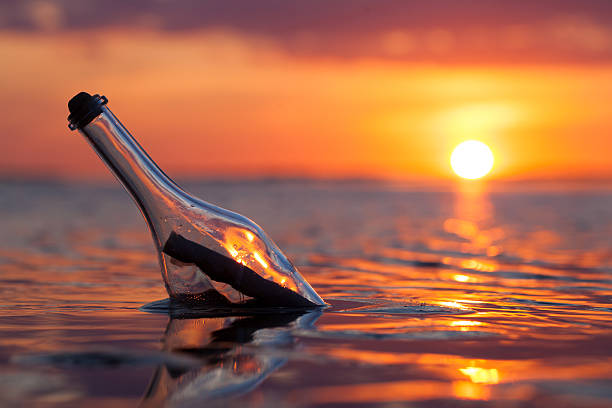 No Strings Fiction:  Fiction Without Commitment

Justin stood on the rocky promontory overlooking the dark, choppy sea.  The wind moaned and whipped around him, causing his thick, woolen overcoat to at times conform to his haggard body, and other times to inflate with the violent, briny air.  His graying hair whipped first this way, then that, the plaything of the savage wind … the same savage wind that, in conspiracy with the water, slowly wore down these jagged cliffs.

The moist, salty air stung his eyes, but no more so than any of life’s winds had.

She was gone.  It was as simple as that.  All those years.  All those tears.  All that laughter.  The fights.  The making love.  In the end, it was as ethereal as the wind that now whipped around him in the near darkness.

He looked down at the bottle in his hand.  There was no way to reach her … so this would have to do.  This is how he’d say his goodbye since she’d deprived him of that opportunity.  He’d said his heartfelt goodbye on a piece of paper and shoved it in the bottle back at the house.

He checked that the top was affixed tightly.  He sighed.

The he reared back and, putting every ounce of strength and emotion into one, smooth and violent motion … the threw the bottle as far out into the unforgiving sea as he could.  He heard the plook! Of the bottle in the choppy sea, but instantly lost sight of it in the darkness of the water.

He sighed.  There was no way of knowing where it would end up.  In the hands of a fisherman?  Or a child collecting seashells?  Or a pair of lovers walking hand in hand along the beach?  But that is fine.  That’s how he’d met her.

He turned and began walking back down the twisting, treacherous trail away from the sea.  He jammed his hands into his pocket to warm them.

Someone was sure going to be surprised when they opened up that bottle and found his grocery list.