Still Not Sure What Year This Is … 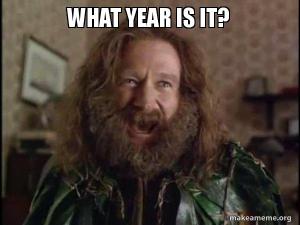 You may remember a post of mine in which I was shaking my head at the fact that Polaroid cameras were becoming a fad and that one could buy brand-new cameras from Polaroid and also Fuji.

Well, today I was at a flea market (yes, I know … not a traditional activity for Easter Sunday) and I was at a booth that was selling miscellaneous treasures from yesteryear, when suddenly there appeared a 20-something hipster and his hipster girlfriend who were oohing and aahing over a couple of original Polaroid cameras that had seen better days (days that were several decades in the past).

You would have thought that they had found an original Holy Grail in good to very good condition and in the original box.

The proprietor shared their enthusiasm (though for perhaps different reasons) and was telling them which of the models they could buy brand-new film for and which models they had to go online and buy original, antique film for.  I found myself wondering exactly what sort of condition the film would be in that had been manufactured almost 50 years ago.

Anyway, one just never knows what fad is going to catch fire next.  I sure hope boxes of old computer cables, speakers, keyboards, mice, 5.25 inch floppy disks, and mouse pads become a big fad.  If they do, I can clean out my attic and finally retire.