Biff On Books: Father of the Bride, Vanity Fair, & Transistors 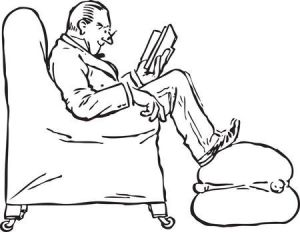 My latest excursion to HPB was on December 31 so that I could take advantage of one of their 20% off sales that they have 3 or 4 times a year. This particular one ended on the 31st, so it was important I get in there when I did! My finds that day included two classics and two technical books. 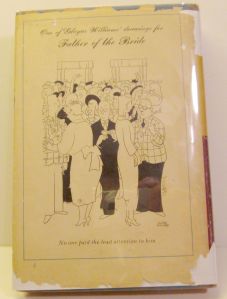 I have loved Edward Streeter’s books ever since I stumbled across the first one about ten years ago. I read “Mr. Hobbs’ Vacation” and then “Father of the Bride” (not realizing that it was the book that the Steve Martin movie was based [very loosely] on), and finally “Merry Christmas, Mr. Baxter”. I really like Mr. Streeter’s writing style. It is relaxed and casual and cozy and in someways very Wodehouse-esque. The books of his that I’ve read all follow the same theme that I identify so closely with, which is that of an everyday man who finds himself overwhelmed by the pace of modern life and by the monkey wrenches that other people throw into his desire to lead a quiet, uneventful life. The main characters in his books are all modern-day Walter Mitty’s, though they are more grounded and pragmatic and don’t spend their time fantasizing about alternate realities.

This particular copy of “Father of the Bride” which I found is in good condition and even has the dust jacket. The dust jacket itself is in pretty sad shape, but to find one at all is pretty rare. In spite of the dust jacket’s poor condition, it is actually the reason I bought the book. I really liked the colors they used and the drawings by Gluyas Williams. In fact, I am a big fan of Gluyas Williams pen sketches, so that is definitely a bonus. The book also has a Mylar book protector on it, which is nice. Unfortunately, the book itself is a “Book of the Month” club edition, which are considerably less desirable than “actual” copies. However, even “actual” copies of the book are only worth a few dollars, so I wasn’t too upset that this was a BOTMC edition.

I don’t usually buy ornate, leather-bound copies of books because, though they are beautiful, they don’t make good reading copies. They are heavy and unwieldy and I live in fear of spilling something on one or accidentally tearing a page or something. However, this one caught my eye. It mostly caught my eye because I just finished reading Vanity Fair a few weeks ago and it instantly became one of my favorite books of all time. It is certainly in my Top Ten favorite books of all time, and probably in the Top Five.

Mr. Thackaray’s writing style is absolutely brilliant. It is at once sympathetic towards individual characters, and yet bitingly sarcastic of the society (particularly the class system) in which they move. However, I like his form of sarcasm and parody because it is subtle and never mean. It merely points out the truth and he often does it in an apologetic, “please don’t shoot the messenger” style. He wields his rapier like a master and even though he eviscerates Victorian sensibilities regarding class and wealth, one cannot help but marvel at how beautifully he wields the instrument with which he cuts those he feels are hypocritical, pompous, arrogant, or who believe they deserve the gifts that Providence (or more accurately, the class system) showers them with. But more importantly than that, the book is delightfully amusing. Mr. Thackaray’s wit is brilliant. Is it subtle at times, though always brilliant. What is more, many of the vanities and foibles and absurdities he points out in Victorian England, are still very much alive and well today.

What is even more remarkable, is that, though this is a book of parody, skewering Victorian England sensibilities concerning class and wealth and mobility, he manages to create characters that we end up actually caring about. I found the book, taken as a whole, created emotional roller coasters for me as the various characters’ fortunes rose or fell, as relationships formed or fell apart, as misfortune fell upon the heads of characters who did not deserve it. And, of course, the relationship between Amelia Sedley and William Dobbin was extremely frustrating, at times amusing, and on the whole gut-wrenching and tragic.
In short, “Vanity Fair” is a work of sheer genius and I marveled on every page at his mastery of the craft of writing and of social commentary. As if those gifts were not enough, he also did all of his own artwork for the novel. Frankly, I consider Thackeray to be a better writer then Dickens, though Dickens was much more prolific and well known. Interestingly, they were rivals throughout their writing careers.

So, being such a fan of the book, I bought this leather-bound version of it just so that I can see it sitting upon my shelf. My previous copy of the book, the Barnes & Noble Classics Series version, is looking a bit worn and is not particularly impressive to look at. I should point out, however, that I loved the B&N Classics Series of the book because it is annotated and that helped tremendously. In fact, I recommend it highly as a “reading copy” of the book. It explained some of the archaic language or phrases, it provided insight into tastes, fads, and activities of that time period, and also explained some of the esoterica that Mr. Thackeray referred to that would not be readily known by modern audiences.

I can’t really review this book because I haven’t read it yet. I bought it for two reasons. One, I am interested in designing and building my own audio amplifiers as a hobby, both transistor and vacuum tube. My interest at the moment is in vacuum tube amplifiers, but right after that I plan to turn my attentions to transistor amplifiers. I found this particular book while browsing the “Technology” section at HPB, hoping to find a book on vacuum tubes. Not surprisingly, they didn’t. But I did find this book instead and I flipped through it and liked it for several reasons. The first reason is mostly because it was heavy and printed on thick, glossy paper (the kind that text books used to be printed on). Secondly, it had lots and lots of schematic diagrams and graphs. And thirdly because a huge portion of the book was dedicated to amplifier circuits. I read chapter one and really like Mr. Kivers writing style. It is informative without being dull (though a certain amount of dullness is to be expected given the topic).

I have not reviewed transistor theory since I was in college (a few millennia ago), so I am hoping I can refresh my memory pretty easily.

Vacuum tube theory, on the other hand, I’ve never been formally taught and what little knowledge I have I’ve picked up from some old codgers I’ve worked with over the years. So that will be more challenging.

I bought this book for many of the same reasons I bought “Transistors” above. It has a big section of transistor theory and its application in amplifiers. Also, it looked like a good, general-purpose reference for electronics to have laying around.

Plus, what’s not to like about a book by someone named “Lurch”?